Way back when the XBox 360 came out (2006!), I did a review of Dead Rising.  It was  a great game, one of my favorites of that first generation of 360 games.  When Dead Rising 2 came out in 2010, it was lost in a sea of other games, so I never ended up playing it.  I did play through part of their free “preview” game, Dead Rising: Case Zero, but I never finished that either… 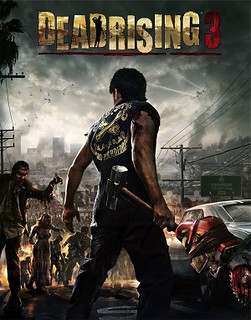 When the Xbox One released a few months ago, Dead Rising 3 was one of the launch titles.  I didn’t buy an Xbox One right away, instead I waited for the holiday drama to subside, and watched for people selling consoles they might have bought only to flip to people that were desperate for one during the holidays.  And indeed, I did get a great deal on a bundle with an extra controller, Dead Rising 3, and Lego Marvel.

My review of the 3rd installment would be very similar to the first one.  It was awesome.  Hilariously awesome.  Execution wise, very similar to the first game.  You have a limited amount of time to follow through the story, rescue people, and wreak mayhem amongst the hordes of zombies.  and on the xbox one, they are literal hordes.  It was amazing to be standing on the roof of a car, and its just zombies, everywhere, as far as the eye can see.  Thousands of them.

Dead Rising 2 apparently introduced the “combo weapon” concept, where you can take 2 random things, like a rake and a car battery, and turn them into an electrified rake.  Or a giant stuffed bear, a machine gun, and a radio (or whatever) to make this automated bear machine gun that sits on the ground and taunts zombies, then kills them.  And many of the combo weapons can then be combined with something else to turn them into “super-combo” weapons that can do amazing amounts of damage or maybe small amounts in a very hilarious way.  One of favorites was “the ultimate shout”, a combination of an orange traffic cone, a speaker, a battery, and a portable radio.  To use it, you’d hold it up and yell through it, causing all zombies, vehicles, and items in like a 30 yard cone in front of you to be destroyed and sent flying.  Another was the “Electro ice staff”, which was a traffic light combined with a battery and then liquid nitrogen.  you could swing it like a staff, or ram it into the ground, freezing everything around you, or aim it like a gun and fire it to freeze zombies in front of you.

And this electro ice staff leads me to one of my favorite features in the game (well, in the XBox One in general), called “Xbox record that”.  While playing any game, you can just say out loud “xbox record that” and it will save the previous 30 seconds of whatever just happened.  Then later you can edit it and share it.  Here’s an example,of me using said “electro ice staff”, racking up a HUGE combo of 525 kills:

As you can see in the video, my character looks a little.. out of the ordinary?  Prior to this, there’s a section of the game where you have to infiltrate an area filled with special forces soldiers.  You have several options for getting into the area, like attacking, guns blazing at the front door, sneaking in through a high window, or blending in by finding a uniform. Like the other dead rising games, there are clothing options scattered throughout so you can change clothes and look like whoever you want.  prior to this point in the game, I was always wearing a “Mr. Rodgers” style red sweater, which I thought looked rather stylish :).  It turns out, if you’re wearing the uniform, special forces soldiers won’t shoot at you until provoked… So I took advantage of this for the rest of the game.  I picked up other clothing to try to get achievements, but I always went back to the SF outfit.  And my crazy outrageous head is a Blanka (of street fighter fame!) mask.  It turns out the mask can be combined with other things to make a mask weapon as well, but I wore it because it looks hilarious.  Even more hilarious than running around killing zombies with a blanka mask on?  Cutscenes with a blanka mask on!

None of the other people in the game seemed to notice that I was wearing a hilariously outlandish mask. I swear there was a kissing scene that I recorded, but I can’t seem to find it on the game dvr.  If I find it, I’ll add it here.

The only thing that I ran into that I didn’t like was that you never know if a main story mission is going to jump you way ahead in time.  When I was near the end, with less than 24 hours (of the initial week) left, I completed what I thought would just be the end of that chapter.  Yes, it completed the chapter, but also skipped all the way to the end of the 24 hour period, right to the last phase of the game, putting me in a timed section where I couldn’t do any of the rest of the side stories that I had in progress!  and not only that, the last part had checkpoints, so when I got about 3/4 of the way through it, I realized that mistakes I’d made at the beginning of the section were going to make it impossible for me to finish what I needed to do before the bad guy finished what he needed to do.  So I restarted that chapter.  Which apparently aborts any and all side missions that were in progress?  Once I completed the game, it lets you start over but keep everything you’ve found, your level, etc.  So I tried to restart the chapter I’d been on before I’d accidentally finished so I could complete all the side missions… only none of the side missions I’d completed to that point were done.  you can redo that chapter, and start any missions that you can find in that chapter, but none of the survivors you’ve rescued are available, etc.  If you want to do any side missions you missed, you pretty much have to start over again from scratch.  Bummer.  Like in the Lego games, I wish there was a prompt before you did something that was going to make it impossible to go back. Or if not a prompt, some other kind of indication that you can’t go back…

All in all, dead rising 3 was a great game.  The story was good, the forced timeline forces you to make some decisions about who you’re going to try to save, and how much extra stuff you’ll try to accomplish.  The characters are believable to a point, and then they throw all believability aside because, well, it’s a video game about zombies that started with mutant cows to produce cheap hamburgers.  While violent, a lot of the violence is hilariously cartoony, like driving a steamroller combined with a motorcycle that shoots flames.  So fun!

At one point, Dead Rising 2 was free in the Games for Gold program, so I did download it (I think!), now I’ll just have to find time to go back and play it, so I can fill in the parts of this story that didn’t make sense!