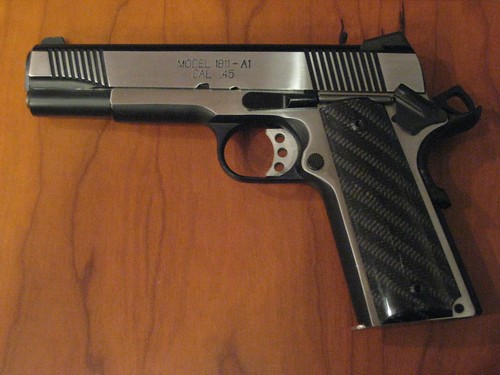 Almost a decade ago, I posted my original review of my springfield 1911.  Over the years, little mods have taken place, like different grips, a different magwell, etc.  The newest piece is a modification to the gun to enable an addition.  I replaced the standard barrel with a threaded storm lake barrel, so that I could attach a suppressor!  And yes, silencers are legal! 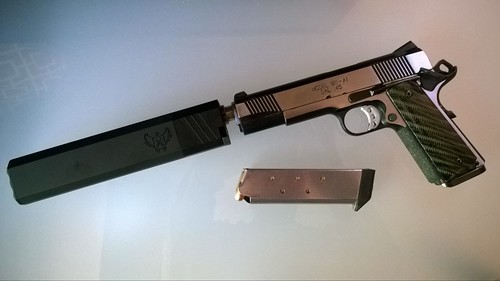 The silencer here is a SilencerCo Osprey 45, which has a unique profile: it isn’t round like other silencers!  The effectiveness of a suppressor is directly related to the internal volume of the suppressor, which captures the expanding gasses as they escape from the barrel.  In order to maximize the volume, most silencers are cylindrical.  And the bigger the cylinder, in both radius and length, the better it works.  however, with a pistol silencer, you don’t want it to be too long, or it quickly becomes too heavy out there on the end of a pistol.  And you can’t increase the radius of the cylinder too much, or you’ll interfere with the pistol’s sights!  For rifles, neither of these are usually an issue, as overall length isn’t as big of a deal, and most rifles already have sights elevated over the height of the bore for other reasons.  But on a pistol, the only real way to increase the volume is to make the suppressor a shape other than a cylinder.  So the Osprey is an eccentric shape, basically a rectangle with rounded edges.  the flat top edge makes most pistol sights still visible, and because of the design of pistols and the location of recoil guides and springs below the barrel, the bottom edge generally doesn’t interfere with any lights or lasers that might be attached on a pistol’s bottom rail, if you have one.

But if the suppressor isn’t a cylinder, a new problem arises: it isn’t symmetric, you can’t just thread it onto a barrel and have it line up!  With cylindrical cans, you just rotate it until the suppressor stops, and it doesn’t matter which way the suppressor ends up.  But with the osprey, that wouldn’t work.  so there’s a locking cam mechanism. You rotate the osprey on normally until it stops, then unlock the lever, rotate the silencer until it is the right orientation, then lock the lever.  from then on, whenever you take it off and put it back onto the same host, it will line up!

At the range, the osprey definitely adds some weight to the front, but doesn’t make the pistol too front heavy, and the weight out front seems to help a little with muzzle rise.  As with any suppressor, the blowback in your face might be a little surprising, so make sure to wear your safety glasses!  And, again, like any suppressor, it does get hot fast, so remember to bring gloves!  I need to buy an ove-glove or something to put in my range bag!